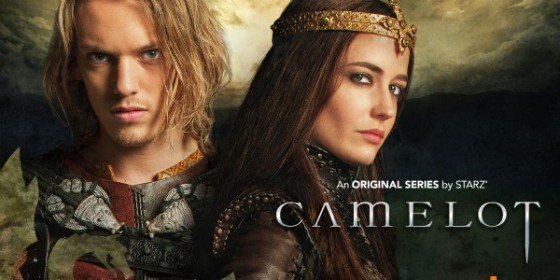 Over the weekend I took time to watch the first couple of episodes of Starz’s take on King Arthur in it’s newest series, Camelot. I’m not sure what I was expecting. If I’m being totally honest, there is very little media concerning Arthurian legend that I don’t enjoy to one degree or another. It was one of my earliest brushes with the fantasy genre, and because so has always held a special place in my heart. But with HBO’s Game of Thrones on the horizon, I wasn’t sure that the Starz fantasy-drama would be able to hold much water by comparison.

I was wrong. It more than holds its own, and fantasy buffs are in for a bright spring season on both fronts.

Camelot, is a well thought-out drama with a brilliant cast and a gorgeous backdrop. While the series has a few hefty expectations to live up to in terms of source material, it manages to honor those aspects of the myth while blazing their own trail to glory.

The premiere manages to set up the premise for the series in the first 15 minutes and doesn’t waste a lot of energy introducing characters. I liked this about it. They give us introductions in broad strokes, and then move on to the storytelling, letting the cast and dialogue do most of the heavy lifting.

The two that obviously shine brighter than any other in the premiere is Eva Green (Casino Royale) as Morgan and Joseph Fiennes (Shakespeare in Love) as Merlin. Green gives Morgan a sensual wickedness that I don’t see getting boring any time soon. She has this haughty intensity about her that is almost frightening, and her political maneuvering with King Lot, who is played exquisitely by the talented James Purefoy (A Knight’s Tale) make you respect her in spite of hating her.

Fiennes as Merlin is a dream come true. He plays the character as aloof and enigmatic. He is unapologetic, and sometimes sometimes callous handling of affairs; he’s a man that sees what needs to be done, and goes about doing it. In his introduction, he arrives at the bedside of Uther, not to save the dying king, but to get his signature on a document that will recognize Arthur as his heir. As Uther dies, Merlin grabs his hand and finishes his signature, pulls of his signet ring, and walks out of the bedchamber in a flourish, without so much as a word to the grieving queen Igraine played by Claire Forlani, (Mallrats). But he’s not totally without some redemption. When confronted with his behavior from time to time he seems apologetic, maybe even a little embarrassed. But always explains the necessity of what he is doing.

The pleasant surprise came to me in Jamie Campbell Bower (Sweeney Todd: The Demon Barber of Fleet Street) who plays Arthur.  When I saw the preview for this series I was not pleased with the casting of Bower in the role. I thought he was too boyish, almost effeminate. But I admit that he surprised me. In the course of the first two episodes, he transforms from a wide-eyed terrified boy into the beginnings of the man who will one day become legend. The transition is pretty impressive.

The history buff in me really loves how they handle the setting of the series. Unlike some recent adaptations that attempt to shoe-horn the Arthurian myth into a Roman inspired setting and call it “realistic”, Camelot is actually very subtle in the conflicting Roman and Anglo-Saxon cultural influences that make up Britain in this age. These influences are made most apparent through the characters and various settings, which was a very smart move in my opinion. King Uther’s court is visually very Anglo-Saxon in it’s dress and custom, while other characters display varying degrees of Roman influence from the aptly named Leontes (Phillip Winchester) who clearly clings to the Roman traditions, to Sir Ector (Sean Pertwee) whose character and estate in the first episode demonstrates true amalgamation between the two cultures.

While the series boasts some realistic aspects, there is plenty to chew on for all of the sword and sorcery buffs out there. Merlin admits to abilities that others deem impossible, but never comes out and acknowledges it as magic, though it obviously is. Morgan’s powers as a shape shifter and knowledge are gained by an alliance with some malevolent supernatural force, which Merlin is aware of and warns her away from. The injection of this fantasy into the reality is a nice touch of escapism that I think will keep the series from getting boring.

Camelot is any Arthurian buff’s wet dream, but it’s so much more than that. If you enjoy period pieces, political intrigue, betrayal, or just plain old-fashioned GOOD character writing, then you’re in for a treat. If you’ve missed out, then catch up while it’s early, because this series definitely has a lot of promise.