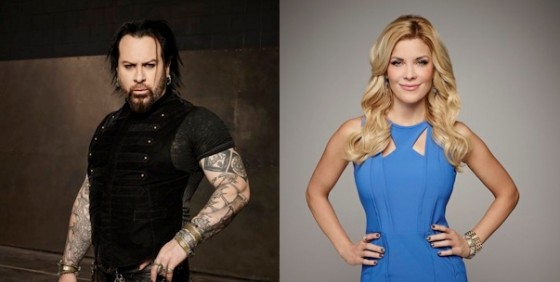 Tonight’s Season 5 premiere of Syfy‘s Face Off is absolutely the best season premiere of the show to date. If you’ve been following the show, you are going to LOVE IT. As we’ve been telling you, the twist this year is that they have brought back contestants from each of the previous four seasons, to make it a Vets vs Rookies season.

For fans of the show, seeing the former contestants is like going to summer camp and seeing your friends from last year. So. Much. Fun.

Judge Glenn Hetrick and host McKenzie Westmore took the time to speak with the press recently, and I asked them if the veterans were held to a higher standard:

Glenn Hetrick:      I wouldn’t say that we’re looking at the newcomers going, “well, you can get away with a lot,”  but there are certain things that we expect out of the progression of each season. There are just certain repetitive things, almost to the point of redundant themes, in what we’re asking them to do, and mistakes that are made that you just keep repeating the same thing so, yes, they’re held to a higher standard in Season 5 and Season 6 but not unfairly so.

Not that we expect the veterans to do something different than what the newcomers are doing, but there’s also the added aspects of this challenge where the newcomers are coming in and they sort of have the benefit of adrenaline. They haven’t been there before, and the veterans are a little more comfortable, but they also have a greater opportunity to second-guess themselves. They have already been there and eliminated once, so the only natural advantage the veterans have is they’re familiar with the lab. They know where everything is and they’re a little more comfortable in the process. That actually could be an advantage or a disadvantage depending on how you look at it.

McKenzie Westmore:         And I’ve got to say too, standing to the sidelines and watching each week – with the judges, Glenn, you guys had such a great approach that you really did look at each challenge with new fresh eyes, whether it was the veterans that were standing up there or the newbies.

You really did treat each one as “this is a new season, this is a new challenge. You are new on this stage,” so it really was, from my aspect and my point of view watching, great to see that it was pretty even and equal playing ground there.

Tonight’s premiere is just so much fun, so tense, and there is so much to take in. It is a terrific setup for the rest of the season, and I can’t wait to see the rest. PLEASE NOTE, THIS IS AN EXTRA-LONG EPISODE. Ninety minutes long, and nothing extraneous. Just watch and see.

Here are a couple of TV spots to get you primed and ready:

Face Off, with host McKenzie Westmore, premieres with a special 90-minute episode tonight at 9/8c before returning to its standard one hour episodes on Tuesdays at 9/8c on Syfy.