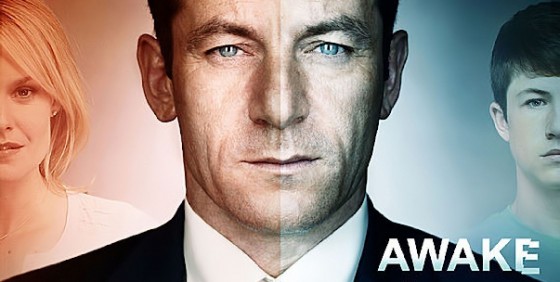 We’ve been waiting for this one for months; but today we’re happy to report that finally, finally, NBC has announced that Awake will be premiering in less than a month. YAY! In conjunction with the announcement they’ve released a great extended trailer, which we now share with you, followed by the press release.

The announcements were made today by Robert Greenblatt, Chairman of NBC Entertainment.

From executive producers Kyle Killen (“Lone Star”) and Howard Gordon (“Homeland,” “24”), “Awake” is an intriguing drama about Detective Michael Britten (Isaacs) who finds he’s living two parallel lives. He’s involved in a car accident that seems to have killed both his son (Dylan Minnette, “Saving Grace”) and wife (Laura Allen, “Terriers”), yet his mind creates an ingenious coping mechanism in which he now lives two separate lives – one where his wife survived and the other where his son did.

Trying to regain some normalcy, Michael returns to solving crimes in both worlds with the help of two different partners, Detective Isaiah “Bird” Freeman (Steve Harris, “The Practice”) and Detective Efrem Vega (Wilmer Valderrama, “That ’70s Show”). Michael is assigned a different case in each reality and quickly discovers that his dual existence is actually a powerful tool. He begins to solve impossible cases by using his two realities to gain unique perspectives and link clues that cross over from world to world.

Helping Michael to navigate his two realities are his bureau-assigned therapists Dr. Evans (Emmy Award winner Cherry Jones, “24”) and Dr. Lee (BD Wong, NBC’s “Law & Order: Special Victims Unit”). While both therapists work to untangle his two worlds, Michael has no interest in proving either one is false. But when memories of the accident begin to haunt him, he is forced to confront the truth about what really happened the night of the crash.

Such great news, we can’t wait to check this one out. By the way did you catch that little tidbit about Grimm? NBC is moving The Firm out of its Thursday at 10/9c timeslot and over to Saturdays at 10/9c. Grimm will now air twice a week, with “encore presentations” on Thursdays at 10/9, and new episodes continuing in the usual Friday at 9/8c slot.

As an aside we simply must point out that, though we are often concerned about our favorite shows getting moved to the Friday “death” slot, nothing says “death” like the Saturday at 10/9c slot, especially when your original spot is taken over by repeats of another show. Sorry, fans of The Firm.

Back to Awake. Jason Isaacs is a fantastic actor, and in this production he is surrounded by a fantastic cast, so that plus the alt reality story element means we’re really looking forward to checking out this new series.