Katee Sackhoff and Tricia Helfer ride for awareness with their passion project, Acting Outlaws. What happens when these two Battlestar Galactica alums and real life BFFs combine their love of motorcycles with their love of humanity and the environment? The LA La Ride was born!

Together as Acting Outlaws, Sackhoff and Helfer embarked on a cross-country ride in October of 2010 from Los Angeles, California to New Orleans, Louisiana to promote awareness for the continued clean-up of the BP Oil Spill Disaster and the Gulf’s restoration efforts. I sat down with the two actresses at the Sci-Fi Expo in Dallas, Texas to talk about their charity company, Acting Outlaws, and their LA La ride, a collaborative endeavor between the Gulf Restoration Network, BMW and Acting Outlaws. 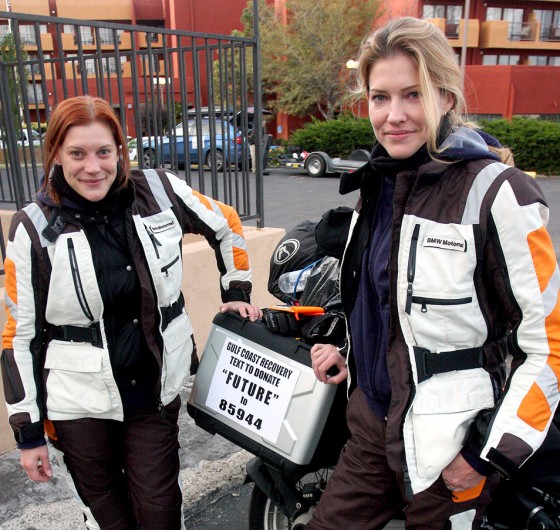 How did Acting Outlaws begin? Katee Sackhoff laid out the foundations for their desire to give back:

Katee Sackhoff: Yeah, it’s a passion project for Tricia and I. Our mission statement is very sincere. We wanted to marry our love of humanity and people and the environment and animals with our desire and love of motorcycles. We wanted to figure out how we could do both things at the same time and we realized that what if we rode motorcycles and did a different ride every year to raise money for different charities. It’s a perfect idea. And we wanted to create a women’s motorcycle line of clothing. So it kind of all came together. It has truly become such a huge passion thing for us because it’s a way to give back but at the same time, do something that we love to do.

For a taste of how this ride began, check out the Acting Outlaws promo:

A documentary team followed the duo on their ride from L.A. to Louisiana. Tricia Helfer talked about their progress with the documentary:

Tricia Helfer: We’re in the middle of editing our documentary from our ride that we did in the fall. We’re aiming to actually make it a full-length documentary. We’re in the process of putting in some spill sight footage of when the spill happened. We’re hoping to have it done by the end of March and then we’ll be sending it out to a couple of festivals and go from there.

SFM: So, then we can look forward to that on the festival circuit?

Tricia Helfer: Hopefully yes, and we’ll also be there to pitch it to a couple of networks as a one-hour special and see. And after that we’ll probably be putting it out on DVD.

Sackhoff and Helfer hosted live chats with fans on the Acting Outlaws channel every night of their ride and most recently, while they were in Dallas. The Acting Outlaws channel is currently on Ustream, but as you can see from this latest broadcast, this may change soon enough! This is part one of the hilarious (due to technical difficulties), yet informative chat session:

Acting Outlaws Q&A with the Grand Prize Winner of their “What Are You Doing?” contest, Kim and Melissa Ashdown (Part One of Seven):

To see more of this video chat, get more details on Acting Outlaws, and to “Do Something” to support this worthy cause, visit http://www.actingoutlaws.org You may be able to catch Katee and Tricia on their next live video chat!

Check out SciFi Mafia’s exclusive interviews with Katee Sackhoff and Tricia Helfer at the Sci-Fi Expo and more here.