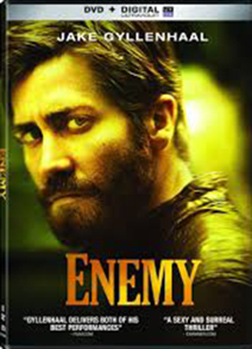 Writers: José Saramago (based on the novel by), Javier Gullón

Adam Bell (Gyllenhaal) is a glum professor who has grown disinterested by his ordinary life. When Adam discovers a man who appears to be his double, the identical men meet and their lives become bizarrely and hauntingly intertwined. Gyllenhaal is transfixing playing both roles, journeying through a world both familiar and strange. The film’s final and unnerving image will not be soon forgotten by audiences. In the end, only one man can survive.

Didn’t see Enemy in the theater? Don’t worry. It’s now available on DVD and Digital Download. Surprisingly this is good news, because this isn’t a movie you should watch once. It’s pretty much mandatory that you watch it twice. At least.

Enemy starring Jake Gyllenhaal (Source Code) as Adam (and Anthony) follows his two characters as they discover each other’s existence and then eventually meet. Adam has a girlfriend played by Mélanie Laurent (Inglourious Basterds) and mother played by Isabella Rossellini (Alias, Blue Velvet) while Anthony’s pregnant wife is played by Sarah Gadon (The Amazing Spider-Man 2).

You can see the questions about Enemy surfacing just by watching the coverage we’ve had on it. Are they twins or are they the same? But lucky for you, the questions don’t even come close to ending there.

I watched this movie all the way through, rewound and watched the ending 4 or 5 times. Then promptly decided I needed to watch the whole thing over from the beginning. This movie is arty and ambiguous, straight up. And of course, just when you think you’ve nailed it, the ending comes out of left field. Like the leftest of left fields.

I do not hesitate at all to give this movie 5 stars. There are times like this when it needs a special bonus star to rise it high above the 5th star. There are going to be people who don’t like this movie. It’s a thinker. You can’t do other things while you’re watching. You have to be willing to sit and watch it, judge it, question it. It’s a puzzling movie, which I love. And my final note is that this is an adult movie. Put the kids to bed. Not appropriate.

Enemy is available from Amazon! Here’s a link!