We told you back in January about the Showtime series Penny Dreadful, a psychosexual horror series set in Victorian England and featuring some of the iconic horror figures of those times. Happily, three of those roles have now been cast. 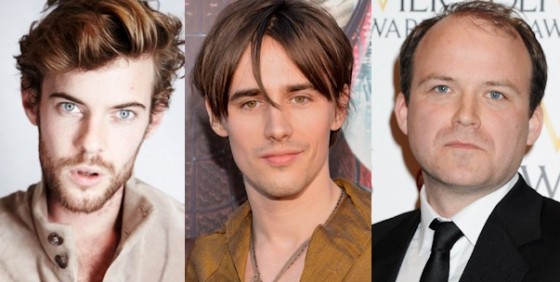 Harry Treadaway (The Lone Ranger) (above left) will be playing Dr. Victor Frankenstein, according to Deadline. Dorian Gray, the man whose transgressions, according to the original Oscar Wilde story, never take a toll on his own handsome features but turn his portrait hideous, will be played by Reeve Carney (Spider-Man: Turn Off the Dark) (above center). A third, “unnamed mysterious character of haunting intensity” will be played by Rory Kinnear (Quantum of Solace) (above right). 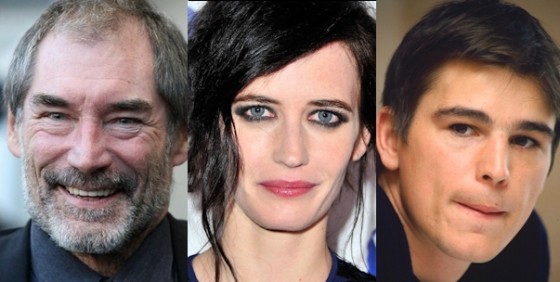 They join former Bond man (also of course from Hot Fuzz, Doctor Who, The Rocketeer, and so much more) Timothy Dalton (left) as Sir Malcolm, a man who sounds very much like Allan Quartermain – “a hardened African explorer on a deeply personal quest”; former Bond woman (also of course from The Golden Compass and Camelot) Eva Green (center) who will play heroine Vanessa Ives; and Josh Hartnett (Sin City, Wicker Park) (right), who will play “fake cowboy” American Ethan Chandler.

Since it’s been a while, here’s that initial press release again:

LOS ANGELES, CA  – Some of literature’s most iconic figures will step into the light on SHOWTIME in PENNY DREADFUL, a psychosexual horror series created, written and executive produced by three-time Oscar® nominee John Logan (Hugo, The Aviator, Gladiator) and executive produced by Oscar winner Sam Mendes (American Beauty, Revolutionary Road) and Neal Street’s Pippa Harris (Revolutionary Road, Call The Midwife), it was announced today by David Nevins, President of Entertainment, Showtime Networks. PENNY DREADFUL will begin production in London in the second half of 2013.

In PENNY DREADFUL, some of literature’s most famously terrifying characters – including Dr. Frankenstein and his creature, Dorian Gray and iconic figures from the novel Dracula – become embroiled in Victorian London. The series weaves together these classic horror origin stories as the characters grapple with their monstrous alienation. This project marks Logan and Mendes’ second major collaboration, following Skyfall, their recent critically-acclaimed and box office record-breaking James Bond film, which Mendes directed and Logan co-wrote; and their first ever collaboration for television. The project will be produced by Mendes’ production company Neal Street Productions.

“John Logan and Sam Mendes are two of the great storytellers of our time,” said Nevins. ”The visual spectacle combined with the psychological insight in their reimagining of these iconic literary characters seems totally mesmerizing to me. This promises to be a wholly original television show.”

The plan is still to air the 8-episode series in early 2014. Can’t wait, thanks Showtime!