Disney’s D23 Expo to Unleash THE AVENGERS and JOHN CARTER 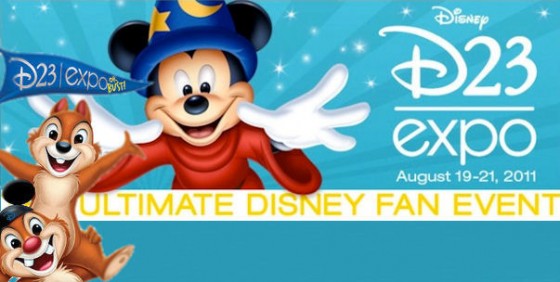 Walt Disney Pictures has issued a press release for the upcoming D23 Expo. The expo is set to highlight Disney and Marvel Studios forthcoming film slate. After such a small presence at this year’s Comic-Con in San Diego, it’s clear that they were saving their best stuff, including Joss Whedon‘s superhero team-up film, The Avengers and Andrew Stanton‘s trip to Mars with John Carter for this year’s D-23.

Check out the press release below for all the details!

BURBANK, Calif. – August 9, 2011 – Exclusively at Disney’s D23 Expo August 19-21 at the Anaheim Convention Center, Disney film fans will go behind the scenes to explore the exciting roster of projects on the horizon at The Walt Disney Studios, with a variety of panel discussions, sneak peeks and exhibits.

In celebration of 25 years of moviemaking magic, five sessions will be devoted to the artistry and technical wizardry of Pixar:

* Michael Giacchino’s Music of Pixar – In this musical presentation, award-winning composer Michael Giacchino explores his early influences through the creation of modern-day classic scores from Ratatouille, Up and Cars 2.

* The Art of Brave – Production Designer Steve Pilcher and Shading Art Director Tia Kratter show how they and their team put paint to canvas and fingers to computer keys to create the stunning visuals of Scotland for Disney•Pixar’s upcoming film Brave.

Expo attendees will also have access to advance screenings of an all-new 3D version of The Lion King, presented by RealD 3D, coming to theaters and homes this fall, and the upcoming ABC holiday special Prep & Landing: Naughty vs. Nice from Walt Disney Animation Studios.

Out on the Expo floor, fans can explore the world of The Walt Disney Studios at their leisure with comprehensive exhibits, including:

Tickets to the D23 Expo are available at http://www.D23Expo.com. Admission includes access to all experiences and entertainment at the D23 Expo, including the Disney Legends Ceremony, and can be purchased for single days or for the full three days of festivities. Admission is $47 for a one-day adult ticket and $37 for children 3-12. Three-day passes are $136 for adults and $106 for children. Members of D23: The Official Disney Fan Club will receive a discount for up to four admissions, as well as early entry to each day of the D23 Expo for themselves and their guests.

About D23 Expo 2011
The D23 Expo—The Ultimate Disney Event for Fans and Families—brings the entire world of Disney under one roof at the Anaheim Convention Center, providing guests with unprecedented access to Disney films, television and theme parks.

About D23
The name “D23″ pays homage to the wonder and excitement that began in 1923 when Walt Disney opened his fledgling studio in Hollywood. D23 is the first official community for fans in Disney’s 88-year history. D23 gives its members a greater connection to the entire world of Disney by placing them in the middle of the magic through its quarterly publication Disney twenty-three; a rich website at www.Disney.com/D23; a collectibles line, The Walt Disney Archives Collection; and special events for D23 Members throughout the year, highlighted by the D23 Expo in Anaheim, California, August 19-21, 2011.

Fans can join D23 at www.Disney.com/D23, select shops at Disneyland Resort and Walt Disney World Resort and www.DisneyStore.com/D23. To keep up with all the latest D23 news and events, follow us “DisneyD23″ on Twitter, YouTube and Facebook.