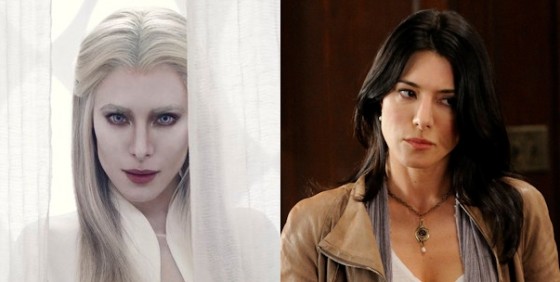 Jaime Murray has been in a number of sci-fi shows, but perhaps her most memorable appearances have been as H.G. Wells (sometimes known as Emily Lake) on Warehouse 13. That is, until she became the exceptionally subtle and powerful Stahma Tarr on Defiance. Tonight we get her on both, and she’ll be tweeting during each as she takes over the Syfy Twitter account.

We’ve got a clip from tonight’s Warehouse 13 right here, and Defiance clips and more here.

AN ALL-NEW DEFIANCE AIRS MONDAY, JUNE 3 AT 9PM ON SYFY FOLLOWED BY WAREHOUSE 13 AT 10PM

JAIME MURRAY TO TWEET LIVE WITH FANS DURING BOTH SHOWS

NEW YORK – May 29, 2013 –Jaime Murray is taking over Syfy on Monday, June 3 from 9-11PM (ET/PT) when the Defiance star returns to Warehouse 13 as H.G. Wells, the “father” of science fiction and sometimes-Warehouse Agent, who disappeared last season.

In the Warehouse 13 episode, “Instinct,” premiering at 10PM (ET/PT), H.G. shockingly resurfaces when Pete (Eddie McClintock) and Myka (Joanne Kelly) track down a crime vigilante with a vicious artifact that savagely disfigures its victims. The reunion is cut short when someone H.G. cares about is caught in the crosshairs of the artifact hunt. Myka must race to bag the artifact before H.G. reverts to her dark past in a lust for vengeance.

To enhance the second screen experience for fans of both series, Murray will live tweet from 9-11PM (ET) during Syfy’s two-hour Powerful Mondays programming block.

Warehouse 13 follows a team of government agents who work at a massive, top-secret storage facility in windswept South Dakota, which houses every strange artifact, mysterious relic, fantastical object and preternatural souvenir ever collected by the U.S. government. The Warehouse’s caretaker Artie Nielsen (Saul Rubinek) charges Pete Lattimer (Eddie McClintock), Myka Bering (Joanne Kelly), Claudia Donovan (Allison Scagliotti) and Steve Jinks (Aaron Ashmore) with chasing down reports of supernatural and paranormal activity in search of new objects to cache at the Warehouse, as well as helping him control the Warehouse itself.

Warehouse 13 is produced for Syfy by Universal Cable Productions. Jack Kenny (The Book of Daniel) is executive producer and showrunner.

Syfy is a media destination for imagination-based entertainment. With year round acclaimed original series, events, blockbuster movies, classic science fiction and fantasy programming, a dynamic Web site (www.Syfy.com), and a portfolio of adjacent business (Syfy Ventures), Syfy is a passport to limitless possibilities. Originally launched in 1992 as SCI FI Channel, and currently in more than 98 million homes, Syfy is a network of NBCUniversal, one of the world’s leading media and entertainment companies. NBCUniversal is owned by Comcast Corporation. (Syfy. Imagine greater.)