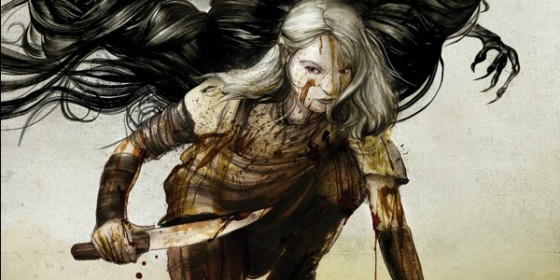 The other day, Dark Horse teased us my dropping an image of an upcoming collaboration with celebrated author Caitlin R. Kiernan. Today it’s officially being announced that Dark Horse and Kiernan are teaming up to bring her dark fiction masterwork Alabaster to the comics medium! Check out the presss release below.

Caitlín R. Kiernan is the author of numerous works of dark fantasy and science fiction, including nine novels, several comic-book series (including Sandman spinoff The Dreaming), and over two hundred published short stories and novellas. Now, she brings her tales to the land of Dark Horse Comics.

Alabaster is based on Caitlín R. Kiernan’s fan-favorite Dancy Flammarion stories, a dark fantasy series centered around a female teenage protagonist of striking appearance and hidden, terrible depths. For nearly as long as she can remember, seventeen-year-old Dancy Flammarion has fought monsters, cutting a bloody swath through the demons and dark things of the world, aimed like a weapon by a merciless seraph, more taskmaster than guardian.

Part continuation, part reimagining, the series begins with Dancy making and breaking an oath in the name of her seraph, who subsequently abandons her. Injured and alone, Dancy has to find her own way for the first time in her life—and the wolves are closing in.

Alabaster will first appear in Dark Horse Presents #9 (on sale February 22, 2012), followed by the five-issue miniseries Alabaster: Wolves, which throws readers into Dancy’s world with a bang, strips away her seraph, and introduces the two characters who will become her long-term supporting cast. Alabaster: Wolves #1 is on sale April 11, 2012.

“One of our essential writers of dark fiction . . . a cartographer of lost worlds.”—New York Times

“Lieber’s art is stunningly refined . . . This is how a comic book should look.”—Comic Book Resources