COWBOYS & ALIENS: What Works In A Sci-Fi and Western Mashup – New Featurette 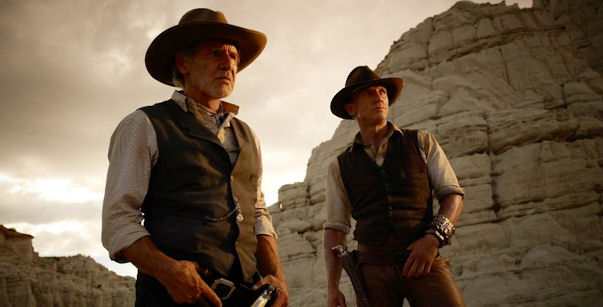 Last week, we showed you Cowboys & Aliens director Jon Favreau’s interviews with the films’s producers Steven Spielberg, Brian Grazer and Ron Howard for a real behind-the-scenes feel of how a production of this caliber is put together.

A new featurette has been released with interviews of the cast and crew intermingled with shots of the film addressing the mashup of genres in Cowboys & Aliens. Just how does this film work being both a sci-fi film and a western? Harrison Ford points out that this film takes the “humanity of a western and folds into it a sense of contemporary interests.” Watch the featurette below to find out:

Here are two sneak peek clips from the film:

In the featurette, Alex Kurtzman (writer/producer) mentions that he’s “never seen a genre mashup like this” and I just want to clear my throat and cough out Firefly here for a moment. But, if Cowboys & Aliens introduces more people onto this genre mashup of sci-fi and westerns and to Captain Mal and the beloved crew of Firefly, then I’m a happy Whedonite.