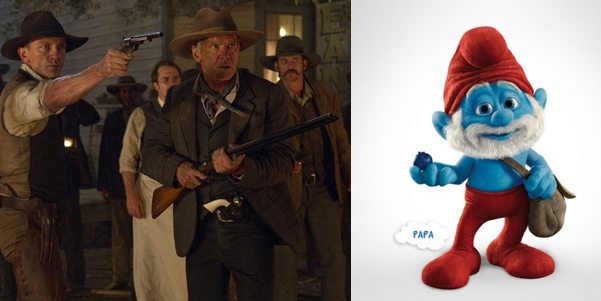 Last weekend’s battle of the box office was a showdown between Jon Favreau’s Cowboys & Aliens and the live-action and animation composite The Smurfs. Cowboys & Aliens won out by the skin of their teeth drawing in $36.4 million over the nostalgic kid’s film with $35.6 million.

On Conan on TBS this week, Cowboys & Aliens actor Harrison Ford admitted that his wife Calista Flockhart had actually taken their ten-year old son to see the rival movie that opening weekend. Check out what Ford had to say about his dollars going to the competition and how he calmly exerted some western justice on a Papa Smurf plush doll.