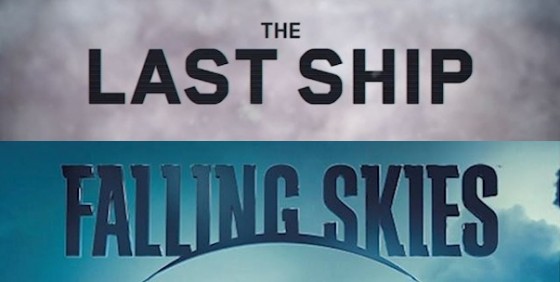 Today TNT announced that it has picked up a second season of new global pandemic series The Last Ship, increasing the number of episodes ordered from 10 in Season 1 to 13 for Season 2. It’s an entertaining show, with scary undertones of potential reality, so thank you, TNT.

As for Falling Skies… To the best of my knowledge, the term “congratudolences” was coined by a showrunner back in 2011 or 2012, upon hearing that a colleague’s show had been picked up for another season, but that it would be the final season. It’s a wonderfully apt term, which for good and bad, now applies to Falling Skies, as TNT has announced a fifth (yay!) and final (boo!) season has been ordered.

It’s possible, however, that those involved in running the series had planned to bring it to a close with the fifth season. Maybe they agree with Guillermo del Toro who said recently, with regard to his series The Strain, that audiences appreciate when a story has a beginning, middle, and end. Or maybe key people involved in the series are ready to move on.

Either way, thanks to TNT for giving Falling Skies the opportunity to bring the story to a close. We’re big fans of this relatively new practice, and are hopeful that it becomes the standard for all series in the future.