Comic-Con 2012: Watch the Entire FRINGE Panel Without Waiting in Line 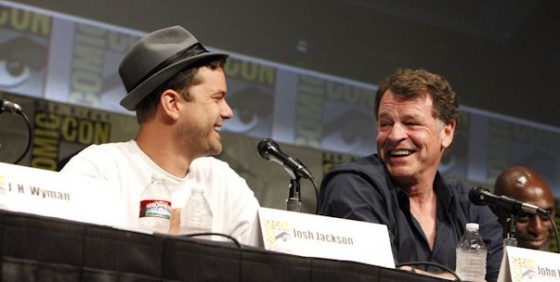 Earlier in the week we promised you more excerpts from the Fringe panel at Comic-Con, but now the fine people at Warner Brothers have made the entire panel available for you to watch! I admit it, I am jealous of each and every one of you who gets to watch this without getting up at 3:30 in the morning. In the comfort of your own home. In your jammies, if you want. Yes, it was absolutely wonderful to be there, breathing the same air space as the cast and showrunner and 6500 fans, but still… in your jammies…

Okay, a few little not-family-friendly references have been lovingly edited out, and you can’t hear the crowd roaring in reaction to various scenes in the new video recap at about minute 33, but otherwise this is basically everything we saw and heard at the panel. It starts with the same featurette that we showed you earlier in the week, but the rest should be unfamiliar, except for the parts we summarized for you in that prior post.

The link to preorder the book that Joel Wyman mentions at about minute 11 – September’s Diary – can be found here. (The Lost book he mentions by the same author, Tara Bennett, is the Lost Encyclopedia.) I love Jasika Nicole‘s impersonation of Lance Reddick. And yes, Jasika, Anna, and Lance all crying had all of us sniffling as well. The recap at minute 33 had not been released before the release of this entire panel video. John Noble‘s voice. The Female Observers. The final bow. Sigh. Let’s watch it again!