It’s been a while since we’ve hashed this one up. We talked about Jack the Giant Killer way back in December of 2011. It’s gotten new name now, Jack the Giant Slayer and here’s a little refresher for you and some trailers to get you ready for the premiere March 1st in 3D and IMAX. 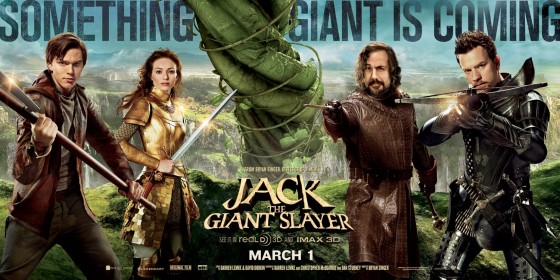 The beloved fairy tale Jack and the Beanstalk gets the big-screen treatment courtesy of director Bryan Singer (Valkyrie) and screenwriters Darren Lemke (Shrek Forever After), Christopher McQuarrie (The Usual Suspects), and Dan Studney in this fantasy adventure about a naïve farm boy who attempts to rescue a beautiful princess from a race of vengeful giants. When Jack (Nicholas Hoult) inadvertently opens a passageway that allows giants to cross into our reality, the towering titans stake their claim on the world of humans. Should they succeed, Jack’s kingdom will be but the first of many to fall. Now, in order to save his people and rescue a noble princess, Jack must summon every ounce of bravery to drive out the invading giants.


And another, because I’m a giver.

It looks like a good time for sure. I like a movie that knows just when to make something look cool and when to make fun of itself, and it can’t go wrong with Ewan McGregor and Bill Nighy. It just can’t!