A few months ago, we brought you a look at how Guillermo del Toro’s monsters versus mechs film, Pacific Rim, had transformed Toronto into a post-sea monster invaded Tokyo. Now we’ve got a great look at Charlie Hunnam (Sons of Anarchy) and Rinko Kikuchi (The Brothers Bloom) on set and suited up for robot battle.

Check out this new pic from EW of Hunnam and Kikuchi as well as a shot from TheFilmStage of Idris Elba in full gear as well: 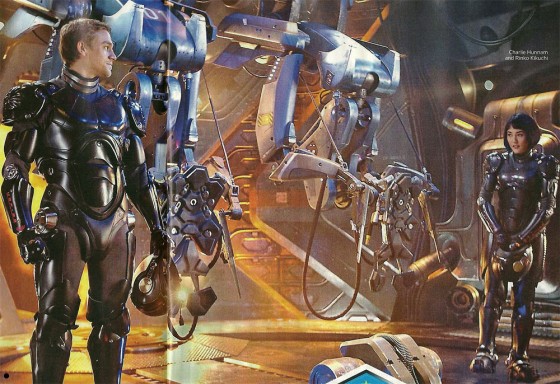 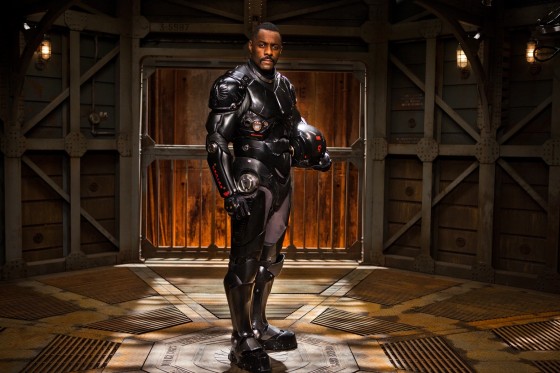 An interesting bit of movie trivia is that del Toro originally was one of his two picks to play the elf prince in Hellboy II: The Golden Army. Del Toro talked about what is so attractive about Hunnam in an interview with TotalFilm:

“The funny thing is Charlie was one of my only two choices for the prince of Hellboy II: The Golden Army. I met with him. He screen tested. I loved Charlie before Sons Of Anarchy. He always brought a certain honesty. He’s the kind of guy that women will love who guys won’t hate.

He’s the right side of honest and good looking that you don’t want to punch him in the face. You want to have a pint with the guy. You want to take him to the pub. There’s male bonding energy with this guy that I thought was perfect for the character.”

When legions of monstrous creatures, known as Kaiju, started rising from the sea, a war began that would take millions of lives and consume humanity’s resources for years on end. To combat the giant Kaiju, a special type of weapon was devised: massive robots, called Jaegers, which are controlled simultaneously by two pilots whose minds are locked in a neural bridge. But even the Jaegers are proving nearly defenseless in the face of the relentless Kaiju. On the verge of defeat, the forces defending mankind have no choice but to turn to two unlikely heroes-a washed up former pilot (Charlie Hunnam) and an untested trainee (Rinko Kikuchi)-who are teamed to drive a legendary but seemingly obsolete Jaeger from the past. Together, they stand as mankind’s last hope against the mounting apocalypse.