Cast Heads Back to HAVEN as Season 3 Production Begins

Twitter was aflutter with good luck wishes between actors and writers yesterday as the cast of the excellent, exquisite Syfy series Haven starts shooting Season 3 today in Halifax, Nova Scotia. And about darn time, we say; they left us with one heck of a cliffhanger. In case you don’t remember, here’s a pic of the cast from last year’s Season 2 opener, followed by Syfy‘s recent press release about the start of production, and where we were left back in September: 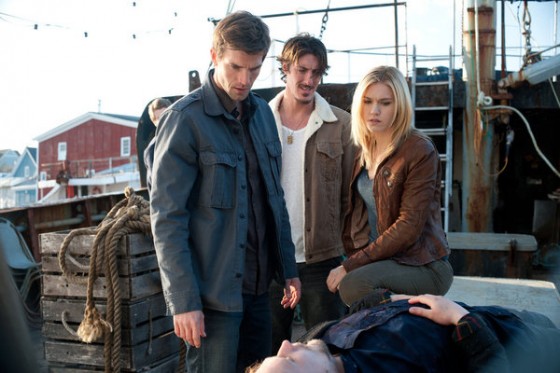 MORE SECRETS ARE ABOUT TO SURFACE AS SYFY’S HIT SERIES ‘HAVEN’ GOES INTO PRODUCTION ON ITS THIRD SEASON BEGINNING APRIL 18 IN HALIFAX, NOVA SCOTIA

NEW YORK – April 3, 2012 – Get ready to journey back to the small town where everyone has a secret when the Syfy hit series Haven goes into production on 13 new episodes of season three beginning April 18 in Halifax, Nova Scotia.

Season three of Haven picks up immediately following the events of the gripping season two finale where Nathan (Lucas Bryant) was warned against pursuing a romantic relationship with Audrey (Emily Rose); Duke (Eric Balfour) learned his family legacy was to kill Haven citizens with troubles; Audrey went missing, and Nathan and Duke engaged in a seemingly deadly argument.

Haven, based on the novella The Colorado Kid from renowned author Stephen King, follows former FBI agent Audrey Parker, who becomes a cop in the small town of Haven, Maine, and soon discovers the town’s many secrets, which also holds the key to unlocking the mysteries of her lost past.

They neglected to mention THE GUNSHOT. Haven is my favorite show on Syfy and I, for one, CANNOT WAIT for its return.