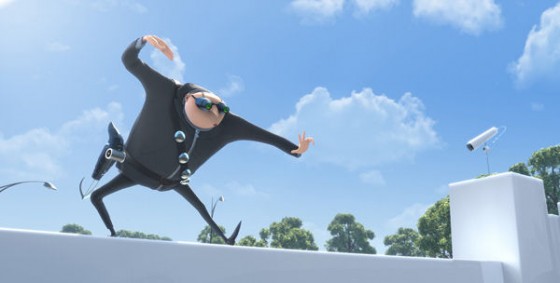 Christmas is rapidly approaching and what better way to enjoy the holidays than with a fun movie that the whole family can enjoy. Despicable Me 2 featuring the voices of Steve Carell, Kristin Wiig, Benjamin Bratt, Miranda Cosgrove, Russell Brand and more will be available on Digital HD on November 26th and on Blu-ray and DVD on December 10th.

Here’s the official press release, followed by a trailer which gives little snippets of the three bonus mini films that come with the Blu-ray:

CELEBRATE THE HOLIDAYS MINION STYLE WITH THE #1 COMEDY OF THE YEAR!

Universal City, California, October 7, 2013—The holiday season just got even brighter with the news that Despicable Me 2, the $872 million worldwide box office phenomenon and the year’s #1 comedy, arrives on Blu-ray™ and Blu-ray 3D™ Combo Packs, DVD and Digital HD including UltraViolet™ on December 10, 2013, from Universal Studios Home Entertainment. The film will also be available on Digital HD November 26, 2013, just in time for families to watch on the go as they gear up for holiday travel. In addition to more than 45 minutes of hilarious and insightful bonus features, Blu-ray Combo Packs will include, from the makers of Despicable Me, three all-new mini-movies starring the film series’ breakout stars, the mischievous but lovable Minions. For a sneak peek of these mini-movies, and other great weekly offers from Despicable Me 2, call Gru at **DM2 (**362) from your mobile phone.*

“Despicable Me 2 is the top box-office comedy of the year and is poised for spectacular success on home entertainment this holiday season,” said Craig Kornblau, president of Universal Studios Home Entertainment. “This adored franchise, with its iconic lovable Minions, stands apart from all others and is sure to be at the top of everyone’s wish list this December.”

This Thanksgiving, Manhattan will share a memorable moment of Minion Madness with the world when a brand new Despicable Me 2 float joins the 87th Annual Macy’s Thanksgiving Day Parade® in celebration of the home entertainment release. Despicable Me 2 will roll out a deliciously decorated cupcake parlor inspired by the hilarious and heartwarming film and featuring Gru, the reformed master criminal turned devoted dad, and a gaggle of his unpredictable helpers, the Minions — including a surprise new character — to keep things lively and entertaining for the film’s millions of fans, both young and old. The 86th Annual Macy’s Thanksgiving Day Parade airs nationwide on NBC-TV, on Thursday, November 28, 2013 from 9:00 AM – 12:00 PM in all time zones.

The Blu-ray™ Combo Pack and Blu-ray™ 3D Combo Pack include a Blu-ray™, DVD and Digital HD with UltraViolet™.
Blu-ray™ unleashes the power of your HDTV and is the best way to watch movies at home, featuring 6x the picture resolution of DVD, exclusive extras and theater-quality surround sound.
DVD offers the flexibility and convenience of playing movies in more places, both at home and away.
DIGITAL HD with UltraViolet™ lets you watch movies anywhere, on any device. Users can instantly stream or download movies to watch on iPad®, iPhone®, Android™, smart TVs, connected Blu-ray™ players, game consoles and more.

Three All-New Mini-Movies Starring the Minions—Introduced by Gru
Puppy
Panic in the Mailroom
Training Wheels
The Making of the Mini-Movies—A fun-filled take on the making of the mini-movies through the eyes of the artists who made them.
Deleted Scene
The Minions—A visit to Illumination Entertainment in Paris and Los Angeles to hear what it’s really like to work with the Minions.
Evil Minions—Bigger, badder and more purple than ever, the newest and fiercest addition to the Minion species can chew through metal and swallow a car. Find out more about the process that led to their creation and design.
A Gru-Some Transformation—A sit-down with Steve Carell as he discusses the transformation of Gru from the ultimate super-villain to super-dad and international spy.
El Hombre Malo: The Villainy Of El Macho—Every great story needs a good villain, and Despicable Me 2 brings on the diabolico in the form of El Macho! Learn about the creation of this character and the actor who brought him to life—Benjamin Bratt.

Gru’s Girls—Miranda Cosgrove, Elsie Kate Fisher and Dana Gaier weigh in on working with Steve Carell and playing the daughters of a world-famous super-villain!
Gadgets Galore—Lipstick tasers, magnet ships, foam dart dispensers and jelly guns—these are the nifty gadgets of Despicable Me 2. Illumination Entertainment pulls back the curtain on what it takes to build a world that would leave even James Bond envious.
Feature Commentary With Directors Chris Renaud & Pierre Coffin

SYNOPSIS
Gru, his adorable girls, and the mischievous Minions are back with a cast of unforgettable new characters in the blockbuster sequel to the worldwide phenomenon.  Just as Gru has given up being super-bad to be a super-dad, the Anti-Villain League recruits him to track down a new criminal mastermind and save the world.   Partnered with secret agent Lucy Wilde, Gru, along with the wildly unpredictable Minions, must figure out how to keep his cover while also keeping up with his duties as a father.  Assemble the Minions for laugh-out-loud comedy in “one of the funniest, most enjoyable movies ever!” (MovieGuide®)


Despicable Me 2 featuring the voices of Steve Carell, Kristin Wiig, Benjamin Bratt, Miranda Cosgrove, Russell Brand and more will be available on Digital HD on November 26th and on Blu-ray and DVD on December 10th.

Despicable Me 2 is available to preorder now from Amazon; here’s the link:
[AMAZONPRODUCT=B008JFUQ3O]