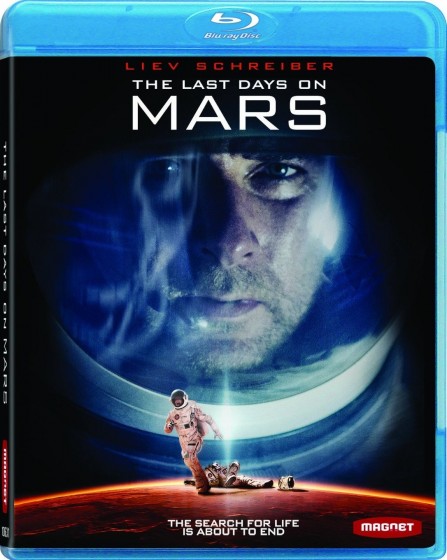 Summary:
On the last day of the first manned mission to Mars, a crew member of Tantalus Base believes he has made an astounding discovery – fossilized evidence of bacterial life. Unwilling to let the relief crew claim all the glory, he disobeys orders to pack up and goes out on an unauthorized expedition to collect further samples. But a routine excavation turns to disaster when the porous ground collapses, and he falls into a deep crevice and near certain death. His devastated colleagues attempt to recover his body. However, when another vanishes they start to suspect that the life-form they have discovered is not yet dead. As the group begins to fall apart it seems their only hope is the imminent arrival of the relief ship Aurora. Directed by Ruairi Robinson, starring Liev Schreiber, Romola Garai, Elias Koteas, Olivia Williams, Johnny Harris, Goran Kostic and Tom Cullen.

Something about the timing of The Last Days on Mars had me thinking I had already seen it when I was actually mistaking it for Europa Report (reviewed here). Clearly they are different movies, and they are actually different in all aspects, but the the quiet release just had me get them confused.

The movie starts out in the final days of a 6 month stint on Mars, and the crew is making the final preparations before they head back to Earth. And in much the same way as a suspense movie inflicts a heinous crime just as a star detective is about to retire, everything goes horribly wrong, just as this space crew is about to head home.

You see the themes and situations in The Last Days on Mars aren’t exactly new concepts but this is far from the worst movie I’ve ever seen and while I’m going to rank it even with Europa Report, I enjoyed it much more.

I did not know going into the movie what to expect (and I really like it that way) and I won’t spoil it for you, but if you read any of the many reviews out for this movie, I guarantee you will spoiled. And while it’s not unexpected, and yeah, you’ve probably seen it before, it is entertaining, and I did really enjoy the movie from start to finish.

For me the redeeming factor in any Blu-ray or DVD purchase lies in its special features, and in watching featurettes with interviews with the cast I think a better appreciation for the story emerges. I also cannot ever get enough of a peek behind the curtain and found the visual effects featurette to be completely fascinating. So much of the movie had amazing effects added to it completely seamlessly. I never questioned it during the movie.

It may not be the most original story ever made, but the acting is strong and the story is engaging. I enjoyed watching it and would recommend you check it out, for sure.

I give the The Last Days on Mars Blu-ray Four Out of Five Stars.

The Last Days on Mars is available from Amazon! Here’s a link!