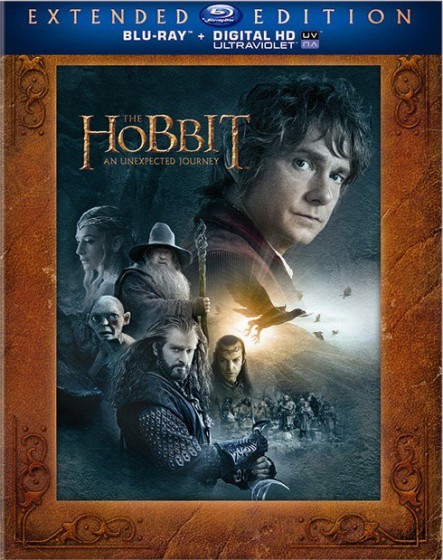 The adventure follows the journey of title character Bilbo Baggins, who is swept into an epic quest to reclaim the lost Dwarf Kingdom of Erebor from the fearsome Dragon Smaug. Approached out of the blue by the Wizard Gandalf the Grey, Bilbo finds himself joining a company of 13 Dwarves led by the legendary warrior, Thorin Oakenshield. Their journey will take them into the Wild, through treacherous lands swarming with Goblins, Orcs and deadly Wargs, as well as a mysterious and sinister figure known only as the Necromancer.

Although their goal lies to the East and the wastelands of the Lonely Mountain, first they must escape the Goblin tunnels, where Bilbo meets the creature that will change his life forever…Gollum. Here, alone with Gollum, on the shores of an underground lake, the unassuming Bilbo Baggins not only discovers depths of ingenuity and courage that surprise even him, he also gains possession of Gollum’s “precious” ring that holds unexpected and useful qualities…A simple, gold ring that is tied to the fate of all Middle-earth in ways Bilbo cannot begin to know.

Fans of Middle-earth will have the opportunity to gain a broader experience of The Hobbit: An Unexpected Journey, from Academy Award®-winning filmmaker Peter Jackson, with the release of the epic fantasy adventure as an Extended Edition on Blu-ray 3D, Blu-ray and DVD from Warner Bros. Home Entertainment (WBHE). A production of New Line Cinema and Metro-Goldwyn-Mayer Pictures, this new cut includes 13 minutes of extra film footage that extends individual scenes, making this the must-see, definitive version for fans. All disc versions of the Extended Edition include nearly nine hours of new bonus features and will be available just ahead of the December 13 theatrical release of the second film of the trilogy, The Hobbit: The Desolation of Smaug.

“I’m thrilled that the Extended Edition will give fans the opportunity to experience certain key scenes in the film as they were originally shot, as well as an abundance of special features,” said Jackson. “It’s exciting to present this expanded and enriched version of ‘An Unexpected Journey’ to allow fans to fully immerse themselves in the movie, before seeing the second part of the trilogy.”

The first of a trilogy of films adapting the enduringly popular masterpiece The Hobbit, “The Hobbit: An Unexpected Journey” was nominated for three Academy Awards®[i].

If you saw The Hobbit: An Unexpected Journey or even wanted to, if you already own the original edition of the Blu-ray or DVD or just wanted to, if you have or may secretly have any love at all for the Peter Jackson version of Middle Earth, GET THIS EXTENDED EDITION of The Hobbit: An Unexpected Journey . Ideally, get it delivered overnight so that you can watch the movie, the movie with commentary, and the 4+ hours of bonus features EACH on the two bonus discs before you see the second movie in the theater. The amount of additional information is absolutely astounding. It is non-duplicative, completely entertaining, and chock full of things you didn’t know and didn’t know you wanted to know, until you watch it all, transfixed. I mean, come on, look at it all:

Extended Edition: movie with additional 15 minutes added within the original version. As a charming little bonus, the menu screen gives a tour of Bag End, Bilbo’s home, and includes audio echoes of the goings-on in the various rooms.

The Filmmakers’ Commentary: By Peter Jackson, Director/Producer/Screenwriter and Philippa Boyens, Co-Producer/Screenwriter: They give a treasure trove of behind the scenes insights throughout the movie, including pointing out the additional footage. Completely fascinating.

New Zealand: Home of Middle-Earth: Featurette from standard release, absolutely outstanding.  As I said in my review of the standard release, it’s the first featurette I’ve ever recommended watching before ever seeing the movie, because you will then appreciate the shocking fact that what was easily thought to be matte painting masterpieces in the background of these shots is actually New Zealand. Gorgeous.

The Appendices Part 7, Introduction by Peter Jackson: A Long-Expected Journey, The Chronicles of The Hobbit, Part 1

Experience the making of The Hobbit: An Unexpected Journey through a multipaart chronological history of the fiilming, from pre-production through principal photography, including boot camp training for the main cast and the world of digital and physical effects.

There are 14 separate featurettes here, with little to no overlap, plus a get-a-taste-of-it 2:42 introduction. And we’re not talking little 2-minute videos. The shortest featurette is an intense 8 minutes, the longest one is nearly 50 minutes; most are in the teens. So much information, and completely interesting. Yes we learn about building the sets and creating the special effects and makeup, but we also learn about how the movie came to be, and personal stories about the actors, often from the actors themselves.

As a lovely bonus, the index, which looks like a beautiful open book, even gives brief descriptions and duration for each featurette as it is highlighted. Plan nothing else for your day when you pop this disc in – except to go on to Disc Three, and/or the extended movie.

Explore the characters and backgrounds of the five families of Dwarves and meet the actors chosen to play Thorin’s Company on the Quest of the Lonely Mountain. Get to know Bilbo Baggins and journey through Middle-earth with the filmmakers, from concept to stunning New Zealand locations.

While I don’t recommend watching these featurettes before ever seeing this first movie of the trilogy, I absolutely recommend watching at least the first featurette of Disc Three, “The Company of Thorin,” before seeing the second movie. You will learn so much about each of the dwarves, there is really no way you won’t appreciate all three movies much more by having the extended background information in your head while you watch.

There are six featurettes on this third disc: one is 16 minutes, about Martin Freeman as Bilbo; another is 32 minutes, about the songs of the movie, and the other four are about an hour a piece.

Feel free to watch Disc Three first if you like, there’s no absolute requirement to watch Disc Two first. But as with Disc Two, once you get started, plan nothing else for your day except to watch either or both of the other discs.

All of the bonus features have been produced with the highest quality picture, sound, and editing. They are the best representation of everything you’d wish for in bonus features. I send heaping amounts of geeky love to everyone involved in their production.

It would be remiss of me to not mention the movie itself, which I reviewed in full earlier this year with the standard edition Blu-ray/DVD combo. The Hobbit: An Unexpected Journey  is beautifully told, captivating, enchanting, enthralling, and clearly a Part One. Happily we aren’t left with a wholly unsatisfactory ending, but a lovely setup of the next part of the story. If you’re a Tolkien Strict Constructionist, don’t bother, you won’t be happy. If, however, enough time has passed since you read the source material, sit back and relax in your comfy chair and enjoy the beauty of this reimagining. The additional footage is a treat, particularly when you watch it through the eyes – well, the voices – of the filmmakers in the Commentary.

There are no special bells and whistles with the packaging of this extended edition, though I expect that will come when the trilogy is complete. For Gandalf’s sake do not wait for that. This is a nice standard clamshell with an appropriately nicer, heavier, book-looking slipcover, and the obligatory slip of paper inside that tells you how to download your Ultraviolet copy. Be happy you’re not obliged to pay for extra-fancy packaging, since, as I said, you know you’re going to be getting that triology set when it becomes available, likely in late 2015.

I have been fortunate enough to review some really outstanding Blu-ray and DVD offerings this year, but this set sweeps the rest from my memory. An outstanding movie, enhanced with a fascinating commentary and wonderful additional footage that does not make the film feel too long when you’re watching it on your couch. Featurettes that could be considered industry standards; they have clearly set the highest bar for me, and I pity whatever “bonus features” come my way for my next review.

The Hobbit: An Unexpected Journey Extended Edition is my choice for 2013 Best Blu-ray/DVD of the Year, and I give it Five Out of Five Stars.

The Hobbit: An Unexpected Journey Extended Edition is available now from Amazon for yourselves and those you love; here’s the link:
[AMAZONPRODUCT=B00E8S2JZ4]