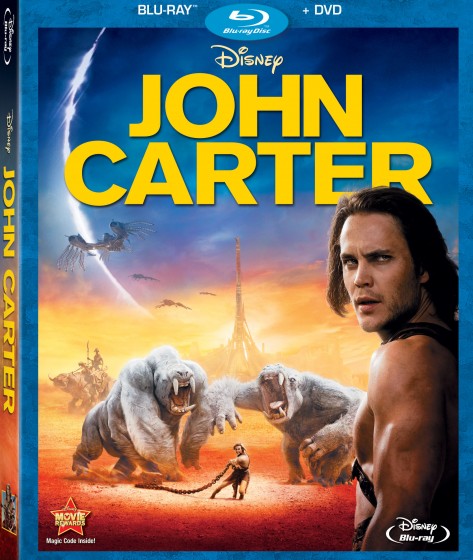 MPAA Rating: PG-13 (for intense sequences of violence and action)

Synopsis:
From Academy Award(R)-winning filmmaker Andrew Stanton comes “John Carter”–a sweeping action-adventure set on the mysterious and exotic planet of Barsoom (Mars). “John Carter” is based on a classic novel by Edgar Rice Burroughs, whose highly imaginative adventures served as inspiration for many filmmakers, both past and present. The film tells the story of war-weary, former military captain John Carter (Taylor Kitsch), who is inexplicably transported to Mars where he becomes reluctantly embroiled in a conflict of epic proportions amongst the inhabitants of the planet, including Tars Tarkas (Willem Dafoe) and the captivating Princess Dejah Thoris (Lynn Collins). In a world on the brink of collapse, Carter rediscovers his humanity when he realizes that the survival of Barsoom and its people rests in his hands. 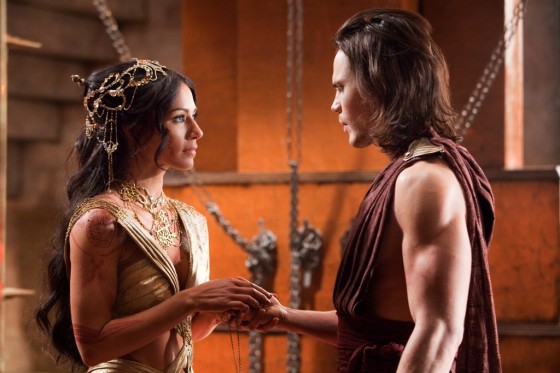 While Disney’s John Carter suffered poorly at the box office, I think it was more the fault of bad marketing and the removal of “of Mars” from the film’s title that pounded the remaining nails in director Andrew Stanton‘s long awaited adaptation, than the actual film itself. After 100 years of repeated failures to adapt the classic Edgar Rice Burroughs science-fiction story, Stanton managed to pull it off, and while not entirely perfect, it is an amazingly fun and completely entertaining film.

Now on to the list of everything that’s included in the Blu-ray Combo Pack of John Carter, notes on quality and my overall star rating.

Very much akin to every other Blu-ray release from Disney that I’ve reviewed, the picture quality is impeccable. Even with the dusty, earth-toned palate of the film, the Blu-ray is crystal clear and noise free, with inky blacks and gorgeous color saturation.

Much like the quality of Disney’s aforementioned video quality, the audio mix is stellar. The bass doesn’t feel overbearing, but its presence is unmistakable during action scenes. The dialogue is crisp, and the surround channels deliver an fantastically immersive audio experience.

John Carter is an entertaining ride, and one of those rare films that is great for all ages, and I can see this becoming one of those cult films that get re-watched over the years. The Blu-ray combo pack is a great value that is packed with a bevy of bonus material,  and it’s well worth the purchase.

I give the John Carter Blu-ray Combo Pack, Four Out of Five Stars.