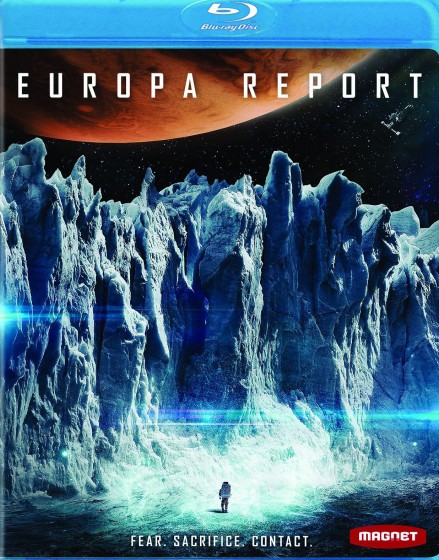 When unmanned probes suggest that a hidden ocean could exist underneath Europa’s icy surface and may contain single-celled life, Europa Ventures, a privately funded space exploration company, sends six of the best astronauts from around the world to confirm the data and explore the revolutionary discovery. After a near-catastrophic technical failure that leads to loss of communication with Earth and the tragic death of a crew member, the surviving astronauts must overcome the psychological and physical toll of deep space travel, and survive a discovery on Europa more profound than they had ever imagined.

I’m always a little bit timid around space thrillers like Europa Report, because I find the idea of space and its lack of gravity and replenish-able sustenance thrilling (in a scary way) enough. When you take all that stress of having to make sure you can breathe and survive and add to it an unknown, I’m just fit to whimper in the corner.

Europa Report prides itself on being really scientifically conscious in creating a science fiction scenario (think 2001: A Space Odyssey) while being low budget. This movie is shot documentary style with multiple stable cameras fixed around the ship and a few hand held cameras that the crew uses. Cut into it are interviews with Earth team members.

It’s really easy to say that the direction, cinematography and acting were great in a movie like this, but you can’t really fully appreciate how great it is until you watch the special feature, a behind the scenes featurette on the visual effects. To see the actors hoisted up on wires surrounded by green, grasping “floating” objects that are handed to them by people in head-to-toe green, that is amazing acting. That is also amazing directing, to capture the shot and know where all of the post work will go. These are amazing talents.

Speaking of special features, it has become apparent to me that this is one of my main critiques of Blu-ray or DVD releases. If I’m going to shell out the money to own it at home it’s important to me to get a little more than just the movie. Not only does it have the great featurette that I mentioned above, but it also have a collection of still shots of the production as well as an in depth interview with composer Bear McCreary.

We’ve already posted a review of the soundtrack as a standalone experience and you can read that here, but in this featurette interview Bear McCreary goes really into what the music had to bring to the story as its own character. And then he dives into how you have to interpret the music as a product of a corporate produced documentary, which is how this movie is meant to feel. It’s really very fascinating.

No doubt what they’ve done with Europa Report in a low budget scenario is great, and the tension of space is real, but something is missing from this movie. The closest I can get to putting my finger on it, is that the missing piece is lacking from somewhere in the story. Somewhere in between the basic plot and the ultimate payoff there is something major that is missing that keeps this movie from being fantastically awesome.

While not fantastically awesome, it is still great and definitely worth getting especially for the added benefit of the special features.

I give the Europa Report Blu-ray Four Out of Five Stars.

Europa Report is available from Amazon! Here’s a link!