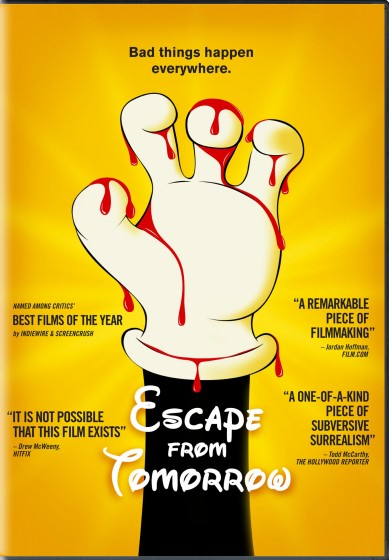 The most provocative film from the 2013 Sundance Film Festival, Escape From Tomorrow should not exist, and yet it does. Like nothing you’ve ever seen, Randy Moore‘s directorial debut is a bold and ingenious trip into the happiest place on earth. An epic battle begins when a middle-aged American husband and father of two learns that he has lost his job. Keeping the news from his nagging wife and wound-up children, he packs up the family and embarks on a full day of park hopping amid enchanted castles and fairytale princesses. Soon, the manufactured mirth of the fantasyland around him begins to haunt his subconscious. An idyllic family vacation quickly unravels into a surrealist nightmare of paranoid visions, bizarre encounters, and an obsessive pursuit of a pair of sexy teenage Parisians. Chillingly shot in black and white, Escape From Tomorrow dissects the mythology of artificial perfection while subversively attacking our culture’s obsession with mass entertainment.

What a great movie. I truly enjoyed it, and absolutely recommend it. If you sense a “but…” coming, you’re right, and I’ll get to the two qualifiers in a minute. First, the great.

This film captures, like nothing I’ve ever seen, what it sometimes feels like to be a parent. Not the best part of it, and not the worst, but the amusement park part. Specifically, the horror of the parent’s amusement park part. The lines. The broken rides. The sunscreen. The whining. The momentarily missing child. The injuries. The irresponsible parent vs. the uptight parent. The “this is nowhere close to The Happiest Place on Earth” feeling. Except in Escape from Tomorrow, you also get physical manifestations of the horror. It is a hoot.

But what is really brilliant is that it takes place at a Disney park. It was actually secretly filmed at both Disney World and Disneyland, without permission; you can learn all about that aspect in the special features (don’t worry, it has a happy ending, and no one will demand you return your copy of the movie). If you have ever been to either park, the locations are instantly recognizable, and it’s fantastic to see it all incorporated in this movie. You’ll get that Disney pang, because there’s no way to not be emotional about the place. If you’ve ever been as an adult, with jaded adult eyes, you don’t have to be a parent to also recognize the seemingly less happy, more commercial, more-forced-cheeriness aspects of the main character Jim’s experience, whether it was your experience or not. Hopefully, though, you won’t also recognize the surreal experiences that I won’t spoil here.

But (qualifier #1) that’s the part that takes me just a little less into the movie, even though it’s the part I was most looking forward to. The scenes that are entirely fantasy have a very “this is one of Mr. Moore’s early efforts, as you can see” feel to them. Not up to the promise, not up to the hype. I was looking forward to something completely amazing, based on the gushing from the early critics, and it just isn’t all that. My second viewing, with more appropriate expectations, was a better experience.

But (qualifier #2)then we have the special features. Escape from Tomorrow is fresh, funny, bizarre, and extremely cool in a guerilla film way, but the special features, which are included on both the Blu-ray and DVD, take it to beyond great, to make it a Must Watch, Must Own Blu-ray or DVD. Here they are, and I recommend you watch them in this order, after watching the movie:

The Making of Escape from Tomorrow: A featurette that tells all about the basis for the story, the filming choices, and most important, what they call “the heist”: the way they secretly filmed on location. There are some terrific, entertaining stories. Most are told by writer/director Randy Moore, with input from cinematographer Lucas Lee Graham and the actors. It finishes off with the story of avoiding a Disney lawsuit, told by “clearance counsel” Michael Donaldson. It doesn’t hurt that the man looks like someone straight out of a 1950’s Disney live-action movie, enhanced by the fact that, like the movie, the featurettes are in black and white.

The entire background of the making of this movie, more than almost any other movie I’ve seen, easily bumps up the score for this movie, even if only in your recollection of it.

Commentary by Randy Moore and Lucas Lee Graham: More great stories about the making of this movie, a must-listen for film students, but a great listen for everyone. You’ll also hear them admit to some of the cinematic issues with the movie, like the fairly poor (and fortunately limited) green screen work. They explain why it is the way it is, which they call, endearingly, “a little rough.” They also mention that apparently a lot of people have made comments about this movie on YouTube, and a lot of those comments are extremely picky. Some of them point out the fact that a hotel room is several stories high, but the floor on the elevator door jamb reads “2.” About which Graham makes one of my favorite observations on a commentary: “They actually noticed that? Who has time for that?”

Commentary by Actors Roy Abramsohn and Elena Schuber: This. Is. BRILLIANT. One of the funniest things I have listened to in perhaps years. Because the entire commentary is done in character. It’s the main characters, Jim and Emily, on a “date night,” watching this video they found, and commenting on it. At first they think one or the other of them took a video of their vacation, but they soon realize that someone else must have taken it. “Oh look, I remember that…” and as things get a little dicey, “I don’t remember any of this…” I can’t tell you more without spoiling, and if you haven’t seen the movie, you won’t get a lot of it anyway, but once you’ve seen the movie, watching this “commentary” is an absolute riot.

The Escape from Tomorrow Trailer embedded above is also a special feature, as is a Theatrical Poster Gallery, which is pretty funny but does spoil a few scenes, so is best left until after the movie.

A few more notable bits: The score by Abel Korzeniowski is gorgeous; sweeping, magical, very Disneyesque in the best sense — except for the purposefully exceptionally annoying song that takes the place of “It’s a Small World” during the ride. The actors look familiar but not anyone you can place, except for Annet Mahendru who plays one of the Parisian teen girls; if you’re a fan of The Americans, she plays the Russian woman Nina. And in case you weren’t sure, if this movie did have a rating it would probably be “R” for sexual situations and nudity.

I give Escape from Tomorrow (Blu-ray) Five Out of Five Stars.

Escape from Tomorrow is available now! The Blu-ray is currently available exclusively at Best Buy; here’s the Amazon link for the DVD:
[AMAZONPRODUCT=B00HRJVHOU]