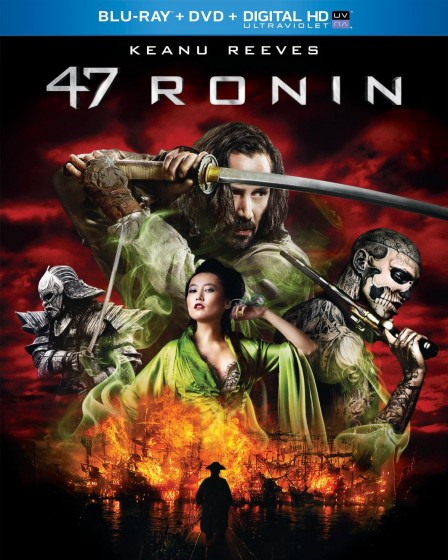 Keanu Reeves stars in the action-adventure epic, 47 Ronin. After a treacherous warlord kills their master and banishes their kind, 47 leaderless samurai vow to seek vengeance and reclaim their honor. This band of ronin must seek help from Kai (Reeves)—an enslaved half-breed they once rejected—in their ultimate fight for redemption in a savage world of mythic and wondrous terrors. Kai becomes their most deadly weapon and the heroic inspiration for these outnumbered warriors to confront their enemy and seize eternity.

There’s a first time for everything, and boy am I glad I get to review the 47 Ronin Blu-ray and DVD Combo Pack, because this is the first time I’ve ever seen a movie that has been the victim of terrible marketing so much so that even several synopsis I saw online were actually bordering on wrong.

I feel like I can say that with confidence, because it is sort of my j-o-b to report on news and share trailers and TV spots and featurettes with you, our readers. And after having watched and shared and commented on all these things we were served up some martial arts, monsters and Keanu Reeves, and this movie is so much more.

First of all, that tattooed guy, there on the cover of the Blu-ray has maybe 45 seconds of screen time all together, tops. His name is Rick Genest and yeah, he looks that way when he wakes up in the morning, no make-up needed. The only reason I can think of that he is there is because he looks cool, because he has nothing to do with the movie. He might be a representative of a chapter of the movie, but there are several other candidates who had bigger roles who could have taken that spot.

Secondly, the whole reason to watch 47 Ronin is for Hiroyuki Sanada (whom you might also know from Syfy’s Helix) who plays Oishi and Rinko Kikuchi (Pacific Rim) who plays the Witch. These two actors steal this movie. They are both so completely talented. Hiroyuki Sanada is an amazingly skilled fighter with the most subtle and telling of expressions and Rinko Kikuchi, who was so soft spoken in Pacific Rim, is so animated and devious. At least she made the cover of the Blu-ray.

The special features section is always my make-or-break section of any review. I just cannot, in good conscience, go shell out money for just a movie. It’s got to be the movie and a little something else if I’m going to own it. The deleted scenes (which are featured on both the DVD and Blu-ray discs) are usually just throw away for me, because I can appreciate that they were cut for a reason, but in this case there is a scene with Hiroyuki Sanada on a ship that I think would have done better in the story and actually felt the void where it should have been when I watched the movie the first time.

These featurettes are great “extras” but should be required viewing after the movie rolls its credits. The making of the gorgeous Japanese landscape, the fight scene rehearsals and the commentary on how an old Japanese historical event was blended with Japanese folklore and legend. These featurettes are easily as entertaining as the movie itself.

There were only two parts to this movie that failed for me. First of all there’s a CGI fox, and a CGI piece of sushi (I’m counting these things as one gripe) that could not have possibly felt less real. Less real than a dragon serpent. Less real than a crazy bull/elk with a whip tail and six eyes. Y’all. A fox and a piece of sushi can perform real life tasks without being added by a computer and why is it that the fantastical can be done well and the setting can be done well, but these two things just look terrible? Was there one person in charge of the CGI fox and the CGI sushi? If so, that person should look into other work, also the person who looked over that work and okay’d it. Not okay.

Secondly, I like Keanu Reeves. Really. And his martial arts abilities and physicality on screen is top notch, but for me his close-ups are really lacking. Give me out-for-vengeance. Give me undying-love. Give me pain-and-anguish-in-a-beating. All these emotions cannot be met with the same blank stare. I just cannot see any difference in emotion. Especially in close-up.

Despite those two issues, 47 Ronin was amazing, beautiful and I believe a terrible victim of wretched marketing. It’s one of those movies that I think of longer and love more. It is totally worth your time and you’ve got to get it on Blu-ray. See this movie. Do it.

I give the 47 Ronin Blu-ray Four Out of Five Stars.

47 Ronin is available from Amazon! Here’s a link!