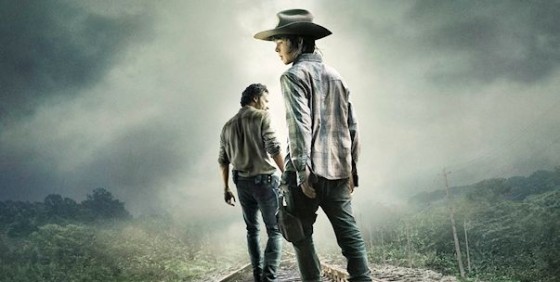 It seems like forever since we lost one of our favorite characters on The Walking Dead, though it still hurts to think about it. Apparently that mood carries over into the second half of the season, at least according to the new synopsis and TV spot that promotes its return on February 9. Still, it looks pretty great:

Following the devastating events of the mid-season finale, Rick and the group are still reeling from the loss of their home, family, and friends. With the destruction of the prison, we see the group of survivors broken apart and sent on divergent paths, unsure of everyone else’s fate. What was a challenging life behind fences and walls grows that much more perilous and precious as they are exposed to new dangers, new enemies, and heartbreaking choices. They will have their faith thoroughly tested — a faith that breaks some of them and redeems others.


Here’s another great The Walking Dead-related video, this time featuring one of The Walking Dead‘s biggest fans, 17-year-old YouTuber Viner Nick Santonastasso. Nick was born with a rare syndrome called Hanhart and has only one arm and no legs.  As it says in the press release below, “his determination and infectious zest for life have enabled him to overcome countless obstacles and he has now become an inspiration for many kids and adults.”

Nick specializes in zombie pranks, and has a huge following on his YouTube channel and Vine account. Fox International, who distributes The Walking Dead worldwide, flew Nick to Tokyo to play a prank on one of his own fans, Norman Reedus:

Tokyo, January 17, 2014: FOX, leading international entertainment pay-TV network and broadcaster of “The Walking Dead” in 125 countries outside the USA, launched its social media driven “#getFOXed” campaign in Tokyo today. Designed to identify super fans of its global hit shows by creating unmatched fan experiences, the campaign kicked off with the Ultimate Zombie Prank on Norman Reedus.

“The Walking Dead” fan and Vine “Zombie Prankster” Nick Santonastasso, who has more than 534,000 followers, was flown to Tokyo, Japan where he was transformed into a walker by the show’s Special Effects guru, Greg Nicotero. Andrew Lincoln (Rick Grimes), Nick’s co-conspirator, manned the control room giving the final go ahead, while hidden cameras captured every angle of Nick’s big scare on Norman Reedus (Daryl). Nick’s prank was a follow up to his existing 2-part viral “Zombie Prank” Vine series:

17-year old Nick, was born with a rare syndrome called Hanhart and has only one arm and no legs.  His determination and infectious zest for life have enabled him to overcome countless obstacles and he has now become an inspiration for many kids and adults. Because of his outspoken love for “The Walking Dead,” Nick was the perfect fan to launch the “#getFOXed” campaign.

Don’t miss the global return of “The Walking Dead” across FOX channels outside of the USA on February 10th. Check local listings for exact times.