Babealicious! The Women of Sci-Fi Grace the Sci-Fi Expo This Weekend 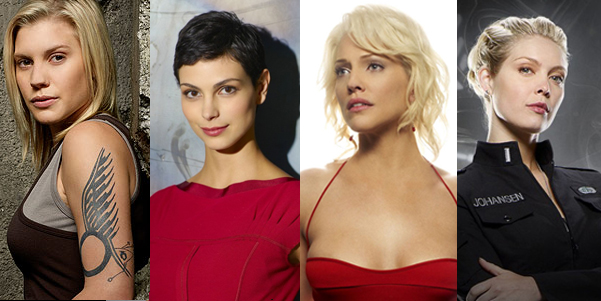 Men, pick your jaws up off the floor and come see Morena Baccarin (V, Serenity), Tricia Helfer (No Ordinary Family, BSG), Katee Sackhoff (24, BSG), and Alaina Huffman (Smallville, SGU) at the Sci-Fi Expo in Plano, Texas this weekend. It has been thirteen years since the Sci-Fi Expo hosted an event of this caliber to celebrate the women of sci-fi and what a line-up they have arranged for adoring fans!

Check out the official press release below and go to the Sci-Fi Expo website for tickets and schedule. In this economy, you can’t beat this for a weekend event with these celebs!

Women of Sci-Fi celebrated at Sci-Fi Expo in Plano, Texas

Morena Baccarin, Tricia Helfer and Katee Sackhoff are among the actresses appearing at the upcoming Sci-Fi Expo celebrating “Women of Sci-Fi” in Plano, Texas. The two-day event will be Jan. 29-30 in the Plano Convention Center, 2000 E. Spring Creek Parkway.

Ms. Baccarin plays “Anna” in  the TV seriesV , and also starred in Stargate and the Firefly/Serenity series. Ms. Helfer and Ms. Sackhoff appeared in the Battlestar Galactica TV series that ended in 2009, and both continue to work in numerous TV shows and movies. Also appearing is Alaina Huffman, who has a recurring role on the Stargate Universe series, will appear in this season’s Smallville as “Black Canary,” and has a new comic book coming out called Agent Mom.

Though women will dominate the show, men aren’t totally excluded. Nick Gillard, stunt coordinator for the original Star Wars movie trilogy, will join the ladies in signing autographs and talking with the fans. Mr. Gillard also did stunt work for the Alien Queen in Aliens.

Artists Russell Walks and Lawrence Reynolds also will be displaying and selling their artwork at the event.

This is the second “Women of Sci-Fi” theme for the Sci-Fi Expo, with the first 13 years ago. Ms. Craig, a Dallas native, rarely appears at conventions these days. But she was happy to make an exception when invited by Ben Stevens, the show’s producer, because she considers him not only a personal friend but also a really good convention promoter.

“I seldom do these shows any more, but Ben’s shows are always good,” Ms. Craig said from her home in California. “The shows are so well organized and he always has a great line-up of guests who are intelligent and fan friendly, and I really enjoy myself when I’m there.”

In addition to meeting the actors and obtaining their autographs for a nominal fee, Expo attendees can peruse the exhibitor hall for classic toys, t-shirts and other memorabilia. They also can attend free Q&A sessions during which the guests will discuss their careers and answer questions from the audience.

Patrons can choose from several admission options to suit their needs, including the $50 VIP pass good for both days. It allows the holder to enter the hall 30 minutes prior to other attendees, gives first access to the autograph lines and ensures reserved seating in the Q&A sessions.

The $20 Priority Pass, also good for both days, allows the holder into the autograph area after VIP patrons but before the general public.

General admission tickets are $10 per day, and allow access to the Q&A and autograph rooms after all VIP and Priority access pass holders.

Children ages 10 and under are admitted free to the convention when accompanied by a paid adult.  Parking is free.

For more information or to pre-order admission tickets, visit www.scifiexpo.com.