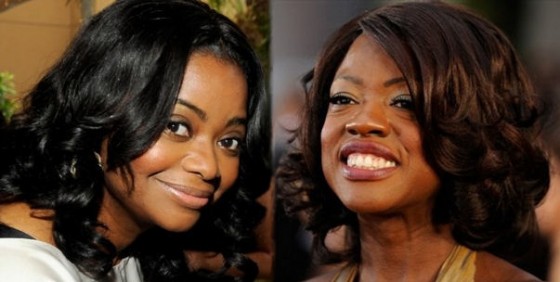 This is great news! It’s always awesome to have cast members from critically acclaimed films join the ranks of our favorite genre, partly because we know they will perform admirably in their roles, and their appearances tend to lend a bit more of the recognition that Sci-Fi always deserves, but usually doesn’t get.

Enter the two lovely ladies you see above – Octavia Spencer (Smashed) and Viola Davis (Extremely Loud & Incredibly Close), who both appeared opposite Emma Stone in The Help. Ms. Spencer recently scored a Golden Globe, a Screen Actors Guild award and an Oscar nomination for her portrayal of Minny Jackson in The Help and Ms. Davis, a previous Academy Award nominee picked up a Screen Actors Guild award for her portrayal of Aibileen Clark in that very same film.

Now, THR reports that Octavia Spencer has joined the cast of director Bong Joon-Ho‘s Indie Sci-Fi film Snow Piercer, which is set in a future where, after a failed experiment to stop global warming, an Ice Age kills off all life on the planet except for the inhabitants of the Snow Piercer, a train that travels around the globe and is powered by a sacred perpetual-motion engine. A class system evolves on the train but a revolution brews.

Spencer will star opposite Chris Evans, John Hurt, Tilda Swinton and Kang Ho Song as a passenger on the train who joins the revolt in order to save her son.

Not to be out-Sci-Fi’d by her co-star, Variety reports that Viola Davis has joined the cast of the long awaited big screen adaptation of the Orson Scott Card sci-fi novel Ender’s Game. Davis will star opposite Harrison Ford, Asa Butterfield, Hailee Steinfeld and Ben Kingsley as a psychologist who oversees the children during training, and develops games to test their skills.

Snow Piercer and Ender’s Game are both slated to hit theaters in 2013.