All the Info on The Official Companion, ENDER’S GAME: INSIDE THE WORLD OF AN EPIC ADVENTURE

Whether you’ve read the novel or already lined up your seat mates for the movie, the book Ender’s Game: Inside the World of an Epic Adventure is looking to be the ultimate companion to both the book and the movie, Ender’s Game. I’m interested, not only for the book, but for the list of goodies that come with it! Check it out below in the official press release. 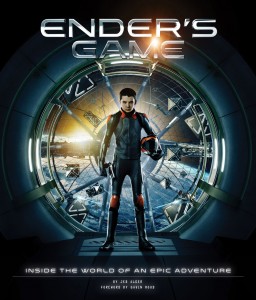 Based on the best-selling novel, Summit Entertainment’s Ender’s Game tells the thrilling story of the fight to save the world from a devastating future. Now, in this official companion volume, the behind-the-scenes world of the film is brought into stunning focus.

Following an attack by an alien race known as the Formics—narrowly countered thanks only to the efforts of legendary war hero Mazer Rackham (Ben Kingsley)—Earth has been preparing itself for the next wave in the conflict. The fate of humanity lies in finding the next Mazer from a crop of the brightest young minds on the planet. Under the watchful eye of the International Fleet, the venerated Colonel Hyrum Graff (Harrison Ford) has been tasked with overseeing their training. Before long a standout emerges among them: Ender Wiggin (Asa Butterfield), a shy but prodigiously talented misfit. As his potential is discovered, Ender is promoted to Command School, where he will soon find the war with the Formics to be more complex than he could have ever imagined.

Also featuring Hailee Steinfeld (True Grit) as Petra Arkanian, Viola Davis (The Help) as Major Gwen Anderson, and Abigail Breslin (Little Miss Sunshine) as Valentine Wiggin, Ender’s Game is set to become one of the biggest motion picture events of fall 2013. This insightful insider’s view of the making of Ender’s Game will bring fans closer into the world of the movie, following cast and crew as it is brought to dazzling life. Summit Entertainment, which co-financed the film with OddLot Entertainment, will release the film in theatres on November 1, 2013.

Jed Alger is the author of The Art and Making of ParaNorman. An advertising writer and creative director with more than twenty years of experience, he has worked on some of the biggest, most challenging brands in the world—Google, Twitter, IBM, Microsoft, Starbucks, Miller Beer, Target, Electronic Arts, and Hewlett Packard among them. Jed graduated from Dartmouth College with a degree in philosophy and received his MFA in creative writing from Columbia University. He lives in Portland, Oregon.

Gavin Hood is a South African filmmaker, screenwriter, producer, and actor, best known for writing and directing the Academy Award–winning foreign language film Tsotsi. He is also the director of X-Men Origins: Wolverine, among several other films.

Insight Editions (www.insighteditions.com) is a publisher focused on creating superlative illustrated books on photography, music, and popular culture. Lavishly produced and visually stimulating, every volume from Insight is dedicated to the skillful interplay of word and image. The books produced are unique works that combine the highest quality print production values with time-honored traditions of publishing and rich subject matter. Elegant and informative, books from Insight showcase the best of art and photography in exquisite presentations of the bookmaker’s craft.

Its feature film business has been fueled by such recent successes as the blockbuster first installment of The Hunger Games franchise, The Twilight Saga Breaking Dawn – Part 2, Now You See Me, Kevin Hart: Let Me Explain, Tyler Perry’s Temptation, Warm Bodies, Texas Chainsaw 3D, The Expendables 2, The Possession, Sinister, The Cabin in the Woods and Arbitrage. Lionsgate handles a prestigious and prolific library of approximately 15,000 motion picture and television titles. The Lionsgate and Summit brands remain synonymous with original, daring, quality entertainment in markets around the world.