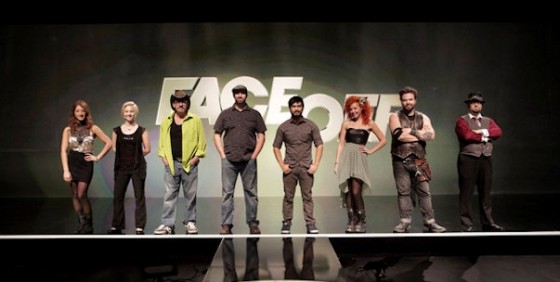 The premiere of Season 5 of Syfy’s Face Off, the excellent special eeffects makeup competition series, is just around the corner. To help kick it off, Syfy will be airing a two-hour special next Tuesday, August 6. Read all about that and the very cool return of contestants from previous seasons, in the press release. Alana! Tate! Eric A! Frank! Laura, who almost won! RJ! And good ol’ Roy!

TWO-HOUR SPECIAL FACE OFF: THE VETS STRIKE BACK AIRS TUESDAY, AUGUST 6 AT 9 P.M. ET/PT ON SYFY

Season 5 of Face Off Premieres Tuesday, August 13 With An Exciting Twist: Veterans Vs. Newcomers

NEW YORK – July 31, 2013 – Syfy sets the stage for the anticipated Season 5 premiere of its hit competition series Face Off with the two-hour special Face Off: The Vets Strike Back, Tuesday, August 6 at 9 p.m. ET/PT. In a Face Off first, Season 5 features eight contestants from past seasons who will battle eight newcomers. The special includes exclusive interviews and a sneak peek of the new season, plus will look back on the past seasons to highlight the veteran contestants’ best and worst moments.

Eager for a chance at redemption, the eight returning contestants are: Alana Rose Schiro from New York; Tate Steinsiek from Henryetta, OK; Eric Zapata from Victoria, TX; Frank Ippolito from Cleveland; Laura Tyler from Orlando; Miranda Jory from Seattle; RJ Haddy from Charleston, WV, and Roy Wooley from Tucker, GA. Hosted by McKenzie Westmore, the special will also feature Face Off judges Ve Neill, Glenn Hetrick and Neville Page, who will share their insights on why the contestants were eliminated originally and why they deserve a second chance.

Season 5 of Face Off premieres Tuesday, August 13 at 9 p.m. ET/PT on Syfy. In the first Foundation challenge, the contestants must complete the looks of costumed partygoers for an elaborate costume ball, with colorfully dressed cast members from Syfy’s new docu-series Heroes of Cosplay (premiering immediately following Face Off) in attendance for inspiration. Twilight director Catherine Hardwicke serves as guest judge for the challenge. For the first Spotlight challenge, the contestants are split into two teams – veterans vs. newcomers. They are tasked with an elaborate challenge in which they must create five original fantasy characters – an ogre, pixie, fawn, troll and a witch. The characters must be cohesive and be able to live in their own hyper-stylized fantasy world. Academy Award winning makeup artist Bill Corso (Lemony Snicket: A Series of Unfortunate Events, The Amazing Spider-Man) is on hand to advise the contestants.

Face Off is a production of Mission Control Media with Dwight D. Smith, Michael Agbabian and Derek Atherton serving as executive producers.

Syfy is a media destination for imagination-based entertainment. With year round acclaimed original series, events, blockbuster movies, classic science fiction and fantasy programming, a dynamic Web site (www.Syfy.com (http://www.syfy.com/)), and a portfolio of adjacent business (Syfy Ventures), Syfy is a passport to limitless possibilities. Originally launched in 1992 as SCI FI Channel, and currently in more than 98 million homes, Syfy is a network of NBCUniversal, one of the world’s leading media and entertainment companies. (Syfy. Imagine greater.)

Face Off, hosted by McKenzie Westmore, airs its two hour Season Five special “The Vets Strike Back” on Tuesday, August 5 at 9/8c on Syfy.