All the Details for MERLIN: THE COMPLETE SERIES Blu-ray and DVD Sets 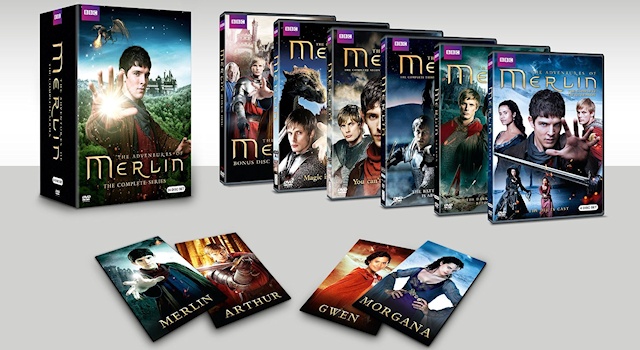 And there was much rejoicing throughout the realm. Giving you plenty of time to get this on your holiday wish list, BBC Home Entertainment has released all the pertinent details for the upcoming release of Merlin: The Complete Series on Blu-ray and DVD. Seasons 1-3 have never before been available on Blu-ray, and both sets include a disc of all-new bonus footage, and a set of character magnets.

New York – September 17, 2014 – BBC Home Entertainment is returning to Camelot this holiday season with Merlin: The Complete Series, arriving onto shelves for the first time as a complete box set on November 4, 2014 on Blu-ray and DVD. Starring Colin Morgan (The Fall), Katie McGrath (The Tudors), Anthony Head (Buffy the Vampire Slayer), Bradley James (Fast Girls) and featuring the voice of John Hurt (the Harry Potter films, Doctor Who), Merlin is the BAFTA-winning retelling of the fabled Arthurian legend that amassed a cult following over the course of five action-packed seasons of swordplay and sorcery. Now the complete series is available together in one regal collection, on Blu-ray (including Seasons One-Three, which have never before been released on Blu-ray) or on DVD, along with a disc of all-new bonus footage and a set of exclusive collectible magnets. Featuring legendary adventures, thrilling stunts and terrifying monsters, this collection is the perfect gift for any lord or lady on your list. From creators and writers Julian Jones (Atlantis, Between The Lines), Howard Overman (Atlantis, Misfits) Johnny Capps (Atlantis, Demons), Julian Murphy (Atlantis, Robin Hood) and Jake Michie (Hex).
In addition to the collectible magnet set, the collection includes an exclusive bonus disc featuring:
• New commentary on two Season Five episodes
• Comic-Con International: San Diego 2012 Panel footage featuring the cast of Merlin
• “The Real Arthur and Merlin” – Stars Colin Morgan and Bradley James travel across Wales, exploring sites from the legend of Merlin
Additional bonus content from previous season releases includes:
• Audio commentaries by cast and crew
• The Making of Merlin
• Video diaries
• Photo galleries
• Deleted scenes and outtakes
• Wallpapers
• Storyboards

About BBC Worldwide North America:
BBC Worldwide is the main commercial arm and a wholly-owned subsidiary of the British Broadcasting Corporation (BBC) operating in the U.S. and Canada. The company exists to maximize the value of the BBC’s assets for the benefit of the UK license payer and invests in public service programming in return for rights. The company operates channels, a production arm, consumer products and a digital business, in addition to handling sales & co-productions. Under these businesses fall two key brands in the U.S. – digital cable channel BBC AMERICA and BBC Worldwide Productions, the production arm responsible for the smash hit Dancing with the Stars.

Merlin: The Complete Series is available for pre-order from Amazon right now! Here’s the link: