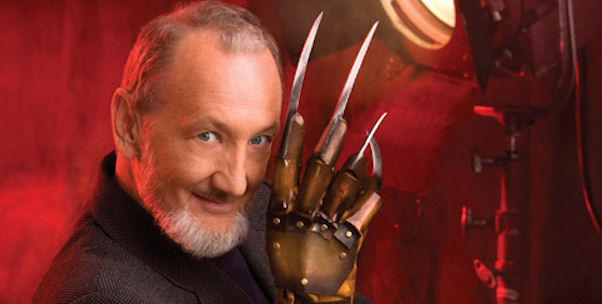 G4 scored a kick ass interview with Robert Englund (A Nightmare on Elm Street) who’s currently on the road promoting his new book, Hollywood Monster: A Walk Down Elm Street with the Man of Your Dreams. See the full 13-minute video interview with Robert Englund below, where he discusses his history in Hollywood, his fans, movies and Jackie Earle Haley taking over the role of Freddy and much more.

CLICK HERE to head over and pick up a copy of Robert’s book Hollywood Monster: A Walk Down Elm Street with the Man of Your Dreams

Check out these reviews by his peers, sounds like a great read!

“Monstrously entertaining! Robert proves as gifted and versatile on the page as on the screen. Irreverent, uproarious, revealing!” — Mark Hamill, star of the original Star Wars trilogy

“If you’ve ever wondered what goes into the creation of a screen icon like Freddy, you should read this book. With wit and candor, Robert Englund gives you the recipe: talent mixed with life lived to the full, served up with boundless energy and a rich imagination seasoned with unswerving respect for his audience, and a passionate dedication to his craft as an actor.” — Doug Bradley, star of Clive Barker’s Hellraiser movies

” ‘Six degrees of Kevin Bacon?’ Ha! Try ‘Three Degrees of Robert Englund!’ The Boris Karloff of our generation has worked with just about everybody and lived to tell the nightmare! Great read!” — Dee Snider, host of Fangoria Radio on Sirius/XM, front man for Twisted Sister

“Reading Robert Englund’s journey through the ups and downs of a Hollywood career is a fun, funny, and eye-opening blast. His life has been no ‘nightmare,’ but rather an entertaining romp! Take a read…if you dare!” — Star Price, award-winning producer of Penn & Teller: Bullshit!

“[Robert] saw the role, and the script as a whole, pretty much as I saw it, as some kind of black comedy, and as the telling of a story about iconic figures locked in the eternal human struggle between good and evil — a modern myth, disguised as a scare-the-pants-off-you horror movie. Robert got it. And he got the role.”– Wes Craven, in his introduction to Hollywood Monster